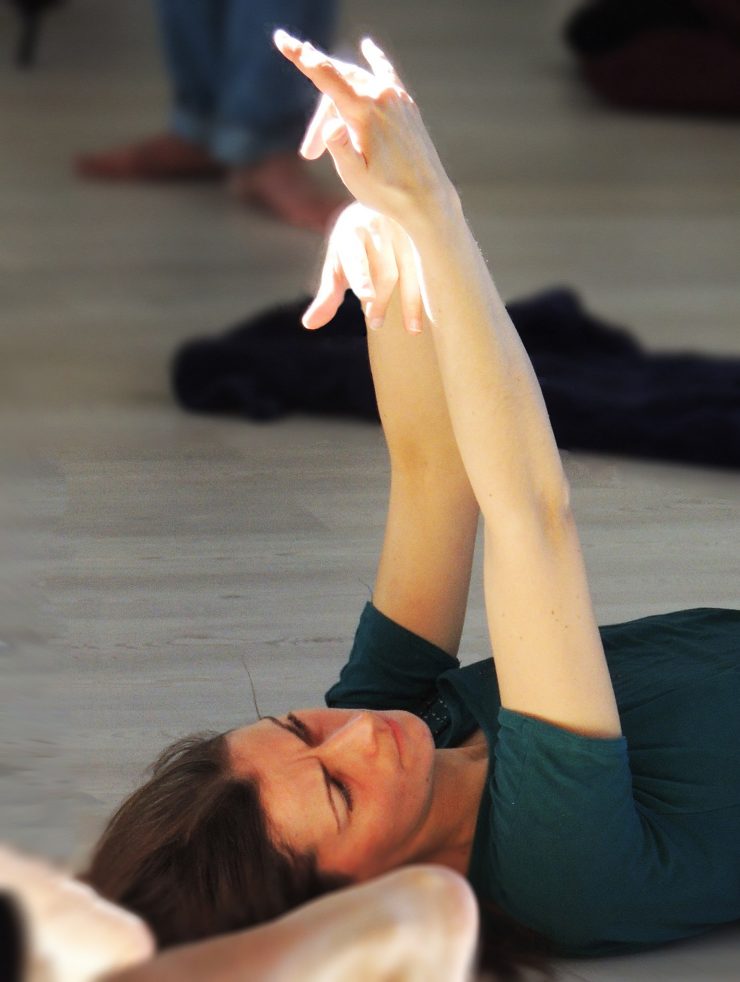 The relationship between moving and being moved was the theme at one of our MOVING MEDITATION workshops in Aarhus last night. This evening became a particularly warm, fun and insightful group exploration, and I think the theme played a role in this. Although of course, as always, the main thing is the presence of a group of wonderful people who came to meditate and explore together – given this main ingredient it is actually quite hard for a facilitator to fuck things up.

If I am right that this theme was particularly helpful, it is probably because it combines philosophy and practice very directly. We were able to reflect it in a new series of variations of our meditation practices and exercises, aimed directly at 1) “listening into what is moving” in some experiential field, and 2) “exploring how you may go with it, pause, share or bend it” in some field of expression, with both kinds of fields varied through the meditation series.

This made it possible for the participants to look into detailed processes and steps of moving meditation and explore what we might call degrees and shades and colors of AGENCY, of being the actor or creator in life.

Developing a loving and nuanced awarenes of just this – the degrees and colors of agency – could be a very helpful practice element.

We are used to thinking of agency in terms of dualities: we want to be either totally in control of things, or to be indifferent and innocent. In other words, things are either 100% subject or 100% object, not just in experience but also in action. This deep-rooted dualistic attitude tends to try to stay in place even when we engage in something utterly embodied and participatory such as moving meditation practices. I have often heard participants express the idea, in one version or the other, that they are not  good enough at it, not quite able to get the practice of moving meditation right, because they are unable to produce or find some kind of automatic or authentic impulse that would dance them – some trance-like compulsion or possession. But with the approches we explored yesterday, this all-or-nothing framework was gently replaced by a playful investigation of moving-between.

Our lived reality may be much more like this, “a world of many streams”, than we try to make it. At least if the Buddhist analysis is correct, it is exactly our clinging to fixed ideas of self, objects and projects of control that creates suffering, harm and lack of presence – and conversely, what the meditation is all about is exactly the letting go of that clinging. The investigations of “the dance of agencies” that we started last night seems a promising path into that. Among many paths, of course. As with other Moving Meditation practices, we don’t really think we are creating or doing something new here, we are just enjoying and exploring an embodied version of what was already there – which may be helpful in making the classical meditation process very accessible, concrete, graphical.

So – is there an intermediary between moving and being moved?

2 thoughts on “On moving and being moved”